GNOME 3.24, the latest version of GNOME 3, is now available. Introducing an updated platform and applications, the release includes a number of major new features and enhancements, as well as many smaller improvements and bug fixes. 3.24 represents another step forward for GNOME, and has much to offer both users and developers.

Night Light is one of the new features being introduced in this release. This subtly changes the screen color according to the time of day, which can help to reduce sleeplessness if you use your computer at night. Another new feature that will make a lot of users happy is the incorporation of weather information into the notifications area. This shows a simple summary of the day’s weather, and links to the Weather application.

This release also includes a new Recipes application, which contains recipes contributed by members of the GNOME community. It has an extensive set of features for adding and editing recipes, creating shopping lists, adjusting quantities and even has a hands-free cooking mode. Other GNOME applications that have been improved for 3.24 include Web, Photos, Polari, Games, Calendar and the Calculator. The Settings application also has a total of three updated settings pages. 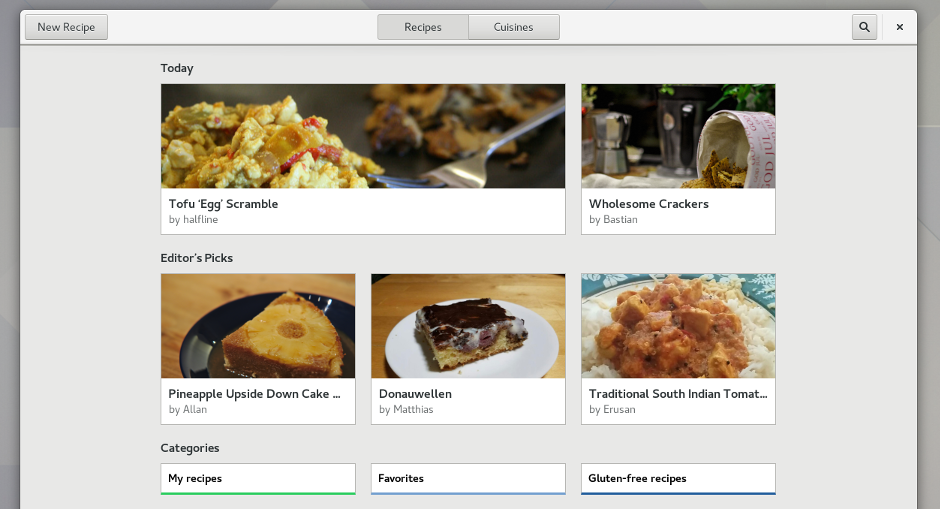 The increasingly mature state of Builder and Flatpak makes GNOME 3.24 a particularly exciting release for developers. Builder makes it possible to use Flatpak as an incredibly easy and stable base for application development. With GNOME’s increasing adoption of Flatpak, this is revolutionizing the GNOME developer experience.

More detailed information about GNOME 3.24 can be found in the release notes.

This article can be freely reproduced with no attribution required. Press queries can be directed to gnome-press-contact@gnome.org. A screenshot pack is available for download.